At the end of each spring and winter semester, graduating Midshipmen, Officer Candidates, and MECEPs receive their commissions as Officers in the Navy and Marine Corps.  Commissioning is the culmination of three to five years of hard work, and marks the new officer’s official transition from student to leader.

Each fall, the ROTCs conduct individual commissioning ceremonies for their branch, and in the spring, participate in a joint commissioning ceremony. The ceremony begins with the oath of office. Each graduate selects the officer that has meant the most to them, and who they would like to model themselves after.

After receiving the oath, the family of the newly commissioned officer steps forward to “pin them.” Pinning is the part of the ceremony where new officer’s rank insignia, cover, and jacket are switched out from those carrying midshipmen rank to those carrying officer rank.

The final part of the ceremony is the first salute. Each newly appointed officer selects a friend or relative who is currently or has served as an enlisted member of the armed services. This friend or family member presents the new officer with their first salute. The salute carries the tradition of the passing of a silver dollar from the officer to the enlisted member with the ideal that the first salute is bought, and all the others are earned. 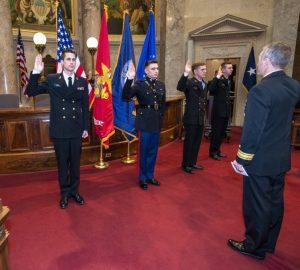