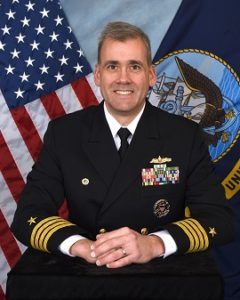 Captain Greg Zacharski, a native of Des Plaines, IL is a 1990 graduate of the University of Illinois at Chicago. He received his commission through the NROTC program.

At sea he has served in USS Briscoe (DD 977) as Main Propulsion Assistant and Damage Control Assistant, in Norfolk, VA; and in USS Russell (DDG 59) in Pearl, Harbor, HI – as the Anti-Submarine Warfare Officer and a Plankowner. He also served as the Chief Engineer in USS Stump (DD 978), again in Norfolk, VA; and as the Materiel and Logistics Officer (N4) on the staff of Destroyer Squadron Twenty-Three (DESRON 23 – The Little Beavers), in San Diego, CA. Additionally he served as Executive Officer in USS Stethem (DDG 63) affecting a homeport shift from San Diego, CA to the Forward Deployed Naval Forces operating from Yokosuka, Japan.

Ashore he was assigned to the Military Personnel Plans and Policies Division (OPNAV N13) as an Enlisted Community Manager (Surface Ratings) and the first Perform to Serve program manager, in Washington D.C. He served in the Fiscal Programming Division (OPNAV N80 – The Bullpen) managing the Shipbuilding account and authoring the charter for the Resources and Requirements Review Board (R3B). Subsequent to his command tour he served as the Executive Assistant to the Commander, Navy Recruiting Command; and then as Director of Navy Officer Recruiting at Navy Recruiting Command in Millington, TN. He was assigned to the Joint Staff in the Pentagon as the Chief, Special Actions Division (J39). Most recently he served on the Chief of Naval Operations’ staff as the Director of the Navy Operational Energy Office, and Concurrently as Director of the Foreign Direct Investment/CFIUS Office.

Captain Zacharski attended the Naval Postgraduate School in Monterey, CA and the Industrial College of the Armed Forces (Eisenhower School) in Washington D.C.

He holds a BA in History, MS in Financial Management, and MS in National Resourcing Strategy.