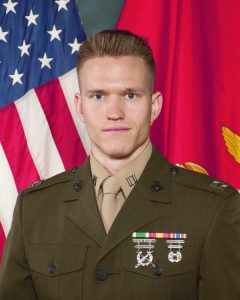 Captain Gaudrimas Matulionis was originally born in Vilnius, Lithuania, and moved to the United States when he was 5 months old. He spent most of his adult life in California, as he attended high school and college there. In 2010, he was awarded an NROTC scholarship, Marine Option, at the University of California, Los Angeles (UCLA). He graduated from UCLA in 2014 with a Bachelor’s in Civil and Environmental Engineering and was commissioned as a Second Lieutenant. Due to a year and a half wait prior to attending the Basic School, Captain Matulionis worked as a teaching assistant in Engineering Ethics and Writing while obtaining his Master’s in Structural and Earthquake Engineering from UCLA.