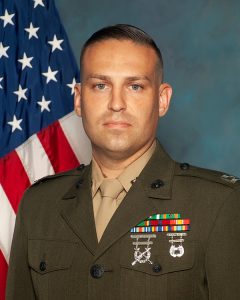 Captain Hoffman was born and raised in Manitowoc, Wisconsin. He enlisted into the Marine Corps in July 2008, and attended Recruit Training and Marine Combat Training on the west coast. Following his graduation, he was assigned the military occupational specialty of 3432/Basic Finance Technician. He was the honor graduate at the Basic Finance Technician Course in Camp Johnson, North Carolina in March 2009 and assigned as a Separations Clerk at the Finance Office in Quantico, Virginia.

While serving in this capacity, he was meritoriously promoted to the ranks of Corporal and Sergeant, and selected as the 2009 Headquarters and Service Battalion Marine of the Year. He was the honor graduate of Advanced Finance Course 2-10 and Corporal’s Course 1-11, and attended the Martial Arts Instructor’s Course at the Martial Arts Center of Excellence in May 2011.

In May 2012, Sergeant Hoffman was selected for the Marine Enlisted Commissioning Education Program, and attended Officer Candidate School that summer. He attended the University of Wisconsin, and was the honor graduate of his Naval ROTC class when he commissioned in May 2015.

First Lieutenant Hoffman was assigned as the Finance Officer for MCRD Parris Island and the Eastern Recruiting Region in August 2019 and was subsequently promoted to Captain in October 2019.

Captain Hoffman began his current tour as the Marine Officer Instructor at the University of Wisconsin in July 2022.