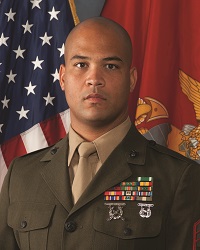 In August 2006 Corporal Harris deployed with Combat Logistics Battalion-1 as the Non-Commissioned Officer in Charge for the Motor Transport and Heavy Equipment Section, Camp Hadithah Dam Detachment. During this time Corporal Harris was responsible for coordinating the offload of resupply convoys and providing life sustaining heavy equipment and motor transportation support to Camp Hadithah Dam. In addition Corporal Harris coordinated more than 100 resupply convoys to Forward Operating Bases in the Hadidthah Triad Area.

In July 2007 Corporal Harris received orders to Headquarters and Service Bn, Quantico, VA where he served as the Equipment Control Non-Commissioned Officer in Charge. His duties entailed supervising the induction of the unit’s fleet into the maintenance cycle, conducting quality checks on vehicles prior to them leaving on missions. In addition Corporal Harris was responsible conducting over 2,000 training miles ensuring the unit was mission capable. In October 2007 Corporal Harris was promoted to the rank of Sergeant.

In April 2017 Staff Sergeant Harris was assigned to the NROTC unit at the University of Wisconsin where he currently serves as the Assistant Marine Officer Instructor.  In July 2018 he was promoted to Gunnery Sergeant.