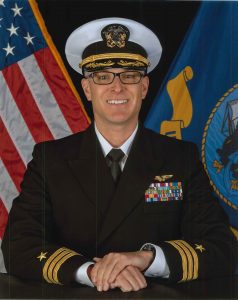 Commander Choquette graduated from Lehigh University in 1998 earning a Bachelor of Science degree in Business and Economics. After earning his Naval Flight Officer wings in Pensacola, Florida in 2001, he reported to the Fleet Replacement Squadron, VAQ-129, for training as an Electronic Countermeasures Officer (ECMO) in the EA-6B Prowler.

Upon completing the initial EA-6B syllabus in 2002, CDR Choquette’s first Fleet squadron was the Yellow Jackets of VAQ-138 where he completed two Western Pacific deployments in support of the Global War on Terrorism with Carrier Air Wing NINE on board USS CARL VINSON (CVN 70). While assigned, he graduated from the Prowler Weapons and Tactics Instructor course and assumed the role as squadron Training Officer.  In 2008, he reported as the Training Officer for the Black Ravens of VAQ-135 where he spent two years developing young aircrew into combat warfighters and enabling the squadron transition to the EA-18G Growler. While attached to VAQ-135, he completed one eight-month Western Pacific deployment with Carrier Air Wing ELEVEN on board USS NIMITZ (CVN 68), supporting combat operations in Iraq and Afghanistan.  He then completed a Department Head tour with the Cougars of VAQ-139 in 2010 where he deployed with Carrier Air Wing FOURTEEN on board USS RONALD REAGAN (CVN 76) in support of Operations TOMODACHI, NEW DAWN and ENDURING FREEDOM. He served as Administration, Maintenance, and Operations Officer, with the squadron earning the 2010 CNAP Battle Efficiency Award and the 2010 CNAF Admiral Arthur Radford Award.  He recently served as the Assistant Air Officer (MINI BOSS) on board USS DWIGHT D. EISENHOWER (CVN 69), completing an extended workup cycle and combat deployment to the FIFTH Fleet AOR.

He has accumulated over 2500 flight hours and 630 carrier arrested landings in the EA-6B and EA-18G. He completed a Master’s Degree in National Security and Strategic Studies at the Naval War College in 2013 and is also an Air Command and Staff College JPME I graduate. His decorations include the Defense Meritorious Service Medal, Meritorious Service Medal (2), Strike/Flight Air Medal (3), Navy and Marine Corps Commendation Medal (4), Joint Service Achievement Medal, Navy and Marine Corps Achievement Medal (2) and multiple unit, service and campaign awards.