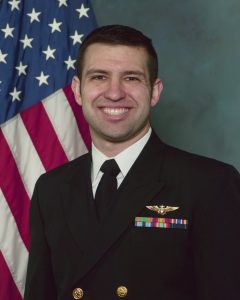 Lieutenant Shaun R. Cero, a native of Oak Creek, WI, earned a Bachelor’s of Art in American Military History from Marquette University, and he was commissioned through the Naval ROTC in May of 2013.

Shortly after commissioning, he reported to NAS Pensacola where he began flight school in June of 2013. After graduating from the Aviation Preflight Indoctrination course in October of 2013, he reported to Corpus Christi, Texas in order to begin Primary Flight Training with Training Squadron TWENTY-EIGHT (VT-28). In September of 2014, upon completion of primary flight training, Lieutenant Cero was selected for the Maritime Advanced Training pipeline. Upon successful completion of the advanced flight training with Training Squadron THIRTY-FIVE (VT-35), he was designated as a Naval Aviator in March of 2015 and subsequently selected to fly the P-8A Poseidon.

After completing initial training at the Fleet Replacement Squadron in Jacksonville, Florida in December of 2015, Lieutenant Cero joined the Patrol Squadron SIXTEEN War Eagles (VP-16), also stationed out of NAS Jacksonville, on deployment in Okinawa, Japan. He completed the last three months of the deployment while conducting operations in the Seventh Fleet Area of Responsibility (AOR). He also participated in two more deployments in the Sixth Fleet and Seventh Fleet AOR’s, respectively.

In November of 2018, Lieutenant Cero assumed his current position as freshman advisor and Bravo Company Officer at the University of Wisconsin-Madison Naval ROTC.